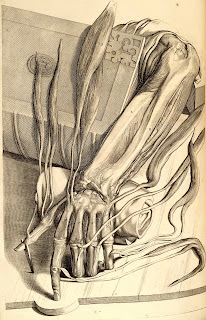 The title of this post comes from a comment that Northrop Frye makes in the ‘Polemical Introduction’ to his collection of essays, Anatomy of Criticism (1957) when he talks about criticism trying to find a personality behind an author’s work. I wondered then if this whole enterprise might not be about wrestling with rhetorical ectoplasm.

I also noticed, as I began to write this commentary on the ‘Polemical Introduction’ that the book’s title has no preceding article, definite or indefinite. I am not sure whether this is significant or not, but it seems to be of a piece with an uncertainty that pervades the entire introduction, and possibly the four essays, the uncertainty of the critic trying to work out where he belongs. ‘Anatomy’ points us towards the idea of the dissection of an existing body and to a desire to find out what is going on underneath the skin. The body lies on the dissecting table, anonymous, bereft of articles. I have the sense that we may already be in trouble. We do not dissect the living. Has criticism already died, or will it be granted a reprieve?

It is perhaps also worth pausing for a moment to think about what ‘polemical’ suggests. Frye is clearly inviting controversy, debate, dispute. He implies that he is looking for an argument; it is up to us as readers to offer that argument if we can.

And yet, even as he challenges us with the title, in the very first paragraph of the introduction, when he lays out his vision of the ‘Anatomy’, Frye immediately offers caveats: ‘[t]he gaps in the subject as treated here are too enormous for the book ever to be regarded as presenting my system, or even my theory’ before inviting us to consider the essays as ‘an interconnected group of suggestions’. There also seems to be a certain amount of foot-shuffling and throat-clearing going on as he lays out his intentions. We should view these essays, he says, in the original sense of the word’s meaning, as ‘a trial or an incomplete attempt’. He is offering possibilities, and offering them tentatively.

And what is Frye attempting to do? Two things. First, he will argue for ‘the possibility of a synoptic view of the scope, theory, principles and techniques of literary criticism’. Secondly, he will try to convince his readers that such a view is attainable. Which, of course, suggests that doubts have been expressed, though by whom he doesn’t say. Perhaps he expects his readers to do the same.

Frye’s first key point is a definition of sorts, namely that criticism is ‘the whole work of scholarship and taste concerned with literature’. It is not very precise, and one thing that will become apparent during a reading of the Polemical Introduction is that Frye seems to find a certain amount of difficulty in offering a proper definition of criticism because the concept itself will prove to resist easy explanation. Indeed, Frye immediately has to leap to the defence of literary criticism as an art in itself rather than being a parasitic form of literary expression: in other words, those who can do, those who can’t instead teach. I can’t decide whether it is more depressing to consider that this argument was already in play almost 55 years ago or that we are still having to deal with it in 2011.

Similarly, all these years later we are still pondering whether the critic is a non-productive intellectual or some sort of cultural middle-man. For that matter, do we even need a cultural middle-man? Frye’s view seems to be that yes, some sort of intermediary is required. The public needs critics, in part to avoid impoverishing or losing its cultural memory, and in part, and more vitally, because: ‘[c]riticism can talk and all the arts are dumb’. This is, I think, a powerful and provocative statement. If the arts are dumb, what is their purpose or role? Why do people create? And, if the arts are dumb, is criticism, which speaks on behalf of the arts, no longer an art? This also, I think, throws open other issues for discussion, about the critic’s suggested role as an interpreter of the arts.

Whatever else it might be, Frye is keen to separate the critic from the artist. Or rather, in acknowledging that artists may also be critics, they cannot be critics, and here I think he means interpreters, of their own work. They might, as Frye notes, have a ‘peculiar interest, but not a peculiar authority’. Frye’s concern is to establish that the critic as ‘his own field of activity’, and that he has autonomy within that field’. Beyond that, ‘criticism deals with literature in terms of a specific conceptual framework’. In suggesting this, Frye – and here I think I’m correct in saying he was writing prior to the rise of continental philosophy as an influence in literary theory in the US – is keen to dismiss external belief systems, such as Marxism. (Somehow, I can’t imagine Frye ever being enthusiastic about Theory.) However, what he seems to struggle with in turn is deriving a system from literature itself. An understanding of good taste is insufficient, and properly so, not least because, as Frye recognises, taste is as much a social issue as it is a matter of judging one book or author against another, and tastes change.

I must admit this gave me pause for thought when I began to think about what I do as a writer of reviews and commentary. On what do I draw when making a judgement on whether I consider a novel to be successful or not, on why I do or don’t like it. Which brings us to Frye’s attempts to conceptualise the critic. On the one hand, we have the scholar who tries to make the study of literature possible, and on the other, what Frye calls the public critic, the person who assumes that literature exists. Somewhere between the two, in a mysteriously indefinable place, stands the critic Frye envisages, as much scientist as artist, practising:

an intermediate form of criticism, a coherent and comprehensive theory of literature, logically and scientifically organized, some of which the student learns unconsciously as he goes on, but the main principles of which are as yet unknown to us.

Except that, annoyingly, what one might for lack of any better terminology term a ‘grand unified theory of literary criticism’ doesn’t seem to exist. If anything, there is a space where it ought to be and other disciplines are squabbling over occupancy of that space. Frye therefore embarks on a lengthy exercise to determine what a systematic conceptual framework of literary criticism might look like, using inductive principles. What is striking to me throughout this exercise is how much it seems to rely on saying what literary criticism doesn’t do, what it shouldn’t do.

Take, for example, the issue of value judgements, whether one book is better than another or worse. Frye identifies two kinds of value-judgement, comparative and positive. The first he associates with what he calls biographical criticism, which relates the work to the man (and something I personally prefer not to practise unless circumstances absolutely demand it; occasionally an author’s work runs very close to their biography). Positive criticism Frye associates with what he calls tropical criticism, dealing comparatively with style and craftsmanship, which is, I guess, part of what I do, but Frye was arguing that literary value-judgements generally are projections of social judgements. Taking a modern example one might crudely say that, for example, Trainspotting isn’t as good as a novel with rather nicer people in it.

As Frye works his way through this process of attempting to construct a framework, the problems keep on piling up. Obviously there is more going on in there than a matter of taste, but what is it?. Frye pinpoint one problems as the relationship between the value-judgement and the actual experience of reading, which is not accessible to us. Accountable only through terminology, it doesn’t recapture the experience of reading, only of generating criticism. On the other hand, simply to draw on a widening body of material read is insufficient. As Frye himself puts it, the danger is of settling into a general stupor of satisfaction with everything written, which is clearly not acceptable.

My initial thoughts on the introduction: there are complex arguments at play here and though I’ve read the introduction twice now, I’m looking forward to the discussion with the other members of this reading group, and anyone else who cares to join in, to try to clarify various aspects of Frye’s project (I’ve not yet read the rest of the essays so I have no idea in which directions Frye himself will head).

It is striking that, for Frye at least, little if any significant progress had been made in developing a systematic approach to literary criticism since Aristotle’s poetics. Sidney’s Defence of Poesy and Coleridge’s voluminous writings are not mentioned in this introduction, with not even a hint of Burke on the sublime, or of Keats’s letters, all of which come immediately to my mind. Which suggests to me that Frye is definitely looking for something detached from the artist’s point of view.

I am still not entirely clear about Frye’s conception of the critic, as distinct from the public man of taste or the scholar, perhaps because, on the one hand, I wonder if my general reviewing doesn’t belong in the former category, and on the other hand, I am also an academic. I’m constantly seeking to bring my academic skills to bear on my reviewing in a way that makes them more generally accessible but I am not always sure they make a good fit with one another. I wonder if Frye will show me a way of reconciling these points of view.

On an historical note, I was also struck by the fact that Frye’s critical landscape consists primarily of white male writers, mostly dead ones; according to the index, Frye mentions Jane Austen, Charlotte and Emily Brontë, Emily Dickinson, Katherine Mansfield, Marianne Moore, Amanda Ros, Gertrude Stein and Virginia Woolf, of whom the only one still living when the book was published was Moore. I think the index lists more female characters than female writers. Which is not to criticise Frye in particular but it’s always a shock to me when I read back to a past when female writers were mainly invisible.