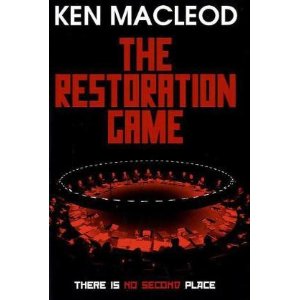 I am continuing to blog the BSFA Award shortlists, still focusing on the Novel shortlist. This time around it’s Ken MacLeod’s The Restoration Game.

I’m fairly sure this is the first MacLeod novel I’ve ever read and I can’t honestly say it’s inspired me to read another, if this is typical of his output (though I’m assured it’s not). My most pressing concern throughout the novel was ‘where is the science fiction?’ I’d been told that there was a highly science-fictional coup de thêatre partway through and when I got there it was indeed highly science-fictional and really rather impressive. And had the story been wrapped more closely around it I would have been delighted. However, it was just sitting there, like an artefact in a museum, and once one had admired it, there wasn’t much left to do except to proceed to the end of the novel.

The Restoration Game is far more a spy novel than it is a science-fiction novel, and in some respects a rather old-fashioned one at that. The story focuses on Lucy Stone, a young woman living in Edinburgh, working for a start-up games company, interested in sf and all the other things a twenty-something geek girl might be interested in. However, when her mother, Amanda, approaches her with a games project, things become more complicated. Amanda’s Ph.D was on the folklore of Krassnia, a tiny autonomous region on the Russian-Georgian border. Amanda later turned her work into the Krassniad, a best-selling work of fiction, and now wants that in turn transformed into a computer game, to provide a cover for political activists planning a revolution in Krassnia. This, so far as it goes, is a pleasing idea.

The story is complicated by the fact that Amanda has, in the past, been a spy, and is obviously working for someone now. The question is, who? And, as it turns out, this plot is not about revolution but about finding an explanation for a mysterious phenomenon. On top of that, Lucy’s family connection to Krassnia reaches further into the past than she had hitherto realised, and nor is she clear who her father is, though there are several possibilities. And there is the matter of who owns a particular mine. The whole set-up has a distinct inter-war years flavour about it, with the unwitting civilian caught up in a situation beyond their control; I was more than passingly reminded of Margery Allingham’s Sweet Danger, though I gather, too, that Helen McInnes’s novels would provide a useful reference point. Having said that, possibly The Prisoner of Zenda might have a thing or two to say. But one asks oneself if, in the twenty-first century, one would quite so calmly believe a cock-and-bull story from one’s manifestly unreliable parent and consent to be driven into a country on the brink of revolution, in search of who knows what? I would not; for the sake of the story, Lucy does.

I suppose I might feel happier if I thought this was a good spy novel too, but the plot seems too mechanical for my taste, and there really aren’t any surprises or indeed that much dramatic tension. There is a lot of explanatory documentation about the political situation in Krassnia, now and in the past, and this is what MacLeod seems to be most interested in. Unfortunately, I didn’t find it that interesting, though I was here reminded of Cory Doctorow’s Little Brother, as though this were carrying out a similar function but concerning Eastern European politics. It’s an intriguing thought given that while I recognise that Little Brother is an important book I have never felt that I was its intended audience; I felt something similar here. There are also a lot of sf-related references, nods to fan cultures, reading lists, and so on, to the point where it felt more like a novel about science fiction rather than it actually being science fiction, and that feeling is reinforced by the framing narrative, which slim as it is, is more engaging than the main part of the novel.

I suspect that I am entirely missing the point of this novel somewhere along the way, that it is some sort of political fantasy, and that for the right reader it’s a marvellous piece of work. I know a number of people rate it very highly but it simply left me cold.

After two novels, Lightborn is winning out over The Restoration Game.