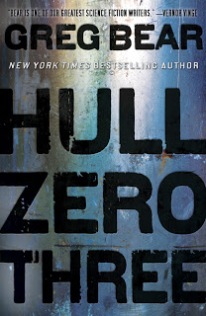 It is dark. He has no idea where he is, or why he has struggled into consciousness. Someone tears open the sac in which he finds himself, grabs him, insists he move now. He is being born. He is both tabula rasa, learning words, yet already filled with words whose presence he doesn’t question. He is the first-person narrator and he will move seamlessly between knowledge and ignorance like this for many pages to come, and the reader will waste too much time wondering why this is happening, and seeking for an explanation which, when it does come, isn’t so much an explanation as a vague hand-waving ‘well, obviously’.

What struck me most when reading Hull Zero Three is just how old-fashioned it feels. It is perhaps best described as a retro-New Wave generation starship story, a trope that just seems incredibly old-hat. The Science Fiction Encyclopedia notes that as a trope it hasn’t been used much since the 1970s, and that doesn’t seem terribly surprising. We’ve had the stories about people coming to realise that they are on a starship rather than a world; we’ve had the stories in which people awake from suspended animation to realise that something has gone terribly wrong with the starship and they must save it; we’ve had the stories about arriving at the destination to find that something has gone terribly wrong, and the colonists must struggle to survive. And in the wake of Gene Wolfe’s Book of the Long Sun, I do wonder what else is left to say.

Hull Zero Three tries to dodge the fear of people forgetting why they’re travelling and avoid that irksome business of having to place adults into suspended animation by fitting out his ship as a genetic engineering factory, run by very few human beings. The intention is that when the ship arrives at its destination it can start manufacturing living beings able to deal with the circumstances it finds, whatever they might be. Effectively, we are talking about a dial-a-workforce service. This, in its way, is entirely pragmatic, and I actually rather regret that we were not shown how this might work in practice. However, and of course there has to be a ‘however’, something went wrong on the voyage, prompting the ship’s crew to divide into two different factions, one for the planned process of cleansing their destination, which seems to have been already inhabited, the other against and arguing that the starship should find another destination. The two groups have been seizing the steering wheel from one another, and during one such tussle, the ship was caught in the aftermath of a supernova and has been severely damaged.

The two factions are still struggling for supremacy at the point when the first-person narrator comes to consciousness and starts trying to make sense of what is going on. What gradually becomes clear is that he is not the first of his kind to have gone through this process, as he gradually comes to realise. His predecessors have learned to pass on information to themselves by means of small diaries, and it is through this medium that we get the necessary info-dumps. It’s done tidily enough (though for the love of god why do we need faux-handwriting fonts to communicate some of this) but it underlines one of the main weaknesses of this novel; we, like the narrator, are heavily reliant on those who have gone before in order to make any progress. Indeed, at times it felt more than a little like being in a rather crude computer game, levelling up only being achieved after endless reiterations of the game’s early stages. For that matter, much of the journeying through the ship’s various hulls felt rather similar, as the narrator gathers food, companions and information which enable him to continue with a quest that at best seems more than a little nebulous.

The narrator, whose name we eventually discover to be Sanjay, is part of a genetic experiment carried out by someone – who, is not clear – intended to finally wrest control of the ship from the group who want to continue with the original plan. He and his companions are the result of someone’s tinkering with the genetic mixtures: thus, the creature intended to be a Killer exhibits a strong moral conscience and the will to say no, conveniently – it’s very uplifting but smacks overly of a deus ex machina, or is this the mysterious presence which haunts the ship, unexplained. 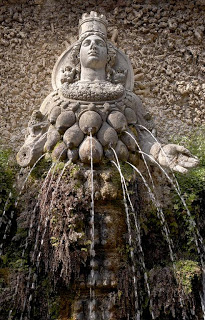 As the story reaches its climax Sanjay has an encounter with the Ship’s Mother, the physical embodiment of the faction that wants to take the ship to its original destination. Not unlike Diana of the Ephesians in some respects, she is also like a queen bee, surrounded by her female children, her workers. Her focus lies in protecting them and Sanjay, or rather not Sanjay but his twin, Sanjim, is destined to be her consort and has been created for that purpose. Sanjay, on the other hand, as a result of his cumulative experiences is aware of the danger she represents with her fanatical desire to preserve her children. One cannot help wondering what is going on here – the devoted mother figure cast as an oppressive tyrant. The gender politics undoubtedly deserve an unpicking I haven’t got time to engage in here.

This set-up, though, is symptomatic of a deeper problem in this novel. How the situation has got to this stage is much more interesting than the fact of having got to this stage yet we have only fragmentary access to those events, much of it guesswork by the characters or learned as a result of gaining access to damaged computer files. There is a spot of mystical hand-waving at the end of the novel but even then the explanation seems thinner than the situation requires. Remember that by this point we have an almost entirely trashed generation starship, strange mutations all over the place and a small handful of specially bred ‘survivors’ whose job is to sort it all out. I can’t stop thinking of that old Tiptree quotation about writing a story: “Start out 500 feet underground on a dark day and don’t tell them”. This novel certainly starts with those criteria; unfortunately, it also stops with them.

It is not the job of a critic to complain about the novel the author should have written but rather to address the novel the author did write. Nonetheless, in this instance it’s difficult to avoid the conclusion that the really interesting stuff happened before the novel started and the reader has instead been invited to the tear-down party. While the Cook’s Tour of the various hulls of the ship holds a certain interest it’s minor in comparison to, say, moving around some of the ships in Alastair Reynolds’ Revelation Space novels (there’s spooky dereliction if you want it). The characters are, after a fashion, engaging but one senses that they have been very carefully constructed not only to confound their original purposes within the starship but to appeal to the reader’s warm and fuzzy side as they form a team. Bear’s writing too is at times only marginally more functional than the spaceship it describes. In the end I find myself wondering who would read such a novel. My conclusion is that possibly Bear has new, young fans who are not au fait with the history of generation starships in science fiction and they might enjoy this novel, but for anyone more familiar with the genre, this novel can only seem very, very tired.